Biased? Not not Me! 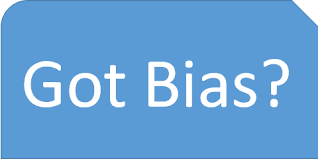 I have been doing a lot of travelling lately both within New Zealand and Australia.

As I delve into the topics around unconscious bias in preparation for my premier MORE Summit in July, it’s interesting to observe just how rife unconscious bias is across vertical markets and within industries in these two countries.

I like the Australian National University’s definition of unconscious bias:

“It is the associations and automatic assumptions, negative or positive, that everyone makes about other people or groups of people based on cultural stereotypes, rather than careful considerations.

Unconscious bias or “hidden bias” is created and reinforced by our background, cultural environment and personal experiences. It is often interpreted as the first impression and intuitions we have when interacting with other people. Unconscious bias is deeply ingrained into our thinking and emotions and is outside of our control.”

So how does it make you feel when you are on the receiving end of the bias?

A couple of months ago I was travelling with my husband to a meeting in Auckland. He was wearing his suit and travelled with his notebook bag. He certainly does not wear a suit every day and does not travel every week like me. What was really interesting was the aircrew on an airline I fly with regularly and how they greeted us both differently during the on boarding process.

Just to put some context around this: I travel every week and have achieved great passenger status with this airline. They greeted him as Sir and said” Have a nice trip.”

I didn’t get a greeting, but rather just a “Thanks.” This followed again on the plane and direction to our seats. I have had this happen a lot when I travel alone as well. I wonder whether it’s the airline’s policy to consciously deliver this message or whether it is unconscious bias working at it’s best – the power of a male suit.

When we got into the taxi in the city the same thing happened. The taxi driver looked as us both. He was greeted with Sir and what brings you here. He didn’t talk to me at all. I was the good supporting wife along for the ride. The reality in fact was quite the opposite. He was supporting me in a couple of important meetings.

What has us make an assessment in a split second based on a series of expectations of what we think the status quo could or would be? And if so at what point is the damage already done and relationships compromised as a result?

I looked further into my own actions and where I might pass judgement in that split second before I get to reframe the conversation. I noted that my bias is around younger managers who I automatically assume could not be experienced enough to have the level of authority they do. I wonder if I do come across as patronising or even perhaps condescending after all I am nearly 50.

In that split second before reframing my mindset, I am left acknowledging that I too have momentary lapses of unconscious bias. My only saving grace is that I am able to recognise it and rewire my mindset quickly.

In order to change any bias, I believe we must first recognise our own as individuals, in our organisations and across the community before any powerful changes can occur. Harvard Project Implicit offers the ability to test your own bias here.

Rebecca set up Paradigm Shift in 2011 because in her corporate career she repeatedly observed leaders choosing to let chaos reign rather than work out strategies for effective change. Or put simply – poor leadership.

With a background in educational psychology, roles as CEO, sales executive, business coach, business owner and teacher, Rebecca uses her proven experience and insights along with her practical tool box to get results.

See what people are saying »

A Seminar or Workshop is coming to a location near you.

Inspiring, practical workshops with great speakers and relevant topics that will help you to be emotionally and physically match fit for business.

Rebecca's Book is Now Available:
EMPOWER ME -The magic is in believing it's possible